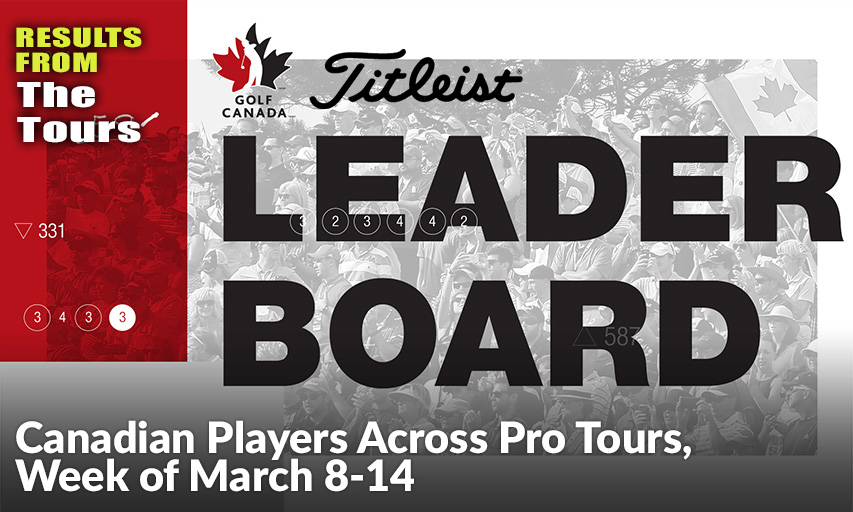 Justin Thomas rallied from three shots back to win THE PLAYERS Championship, becoming just the fourth player to win a major, THE PLAYERS Championship, the FedEx Cup and a World Golf Championship. He is the 14th player since 1960 to win 14 times on the PGA TOUR before turning 28, joining Tiger Woods, Jack Nicklaus and Johnny Miller. After being outside the cut line through nine holes on Friday, Thomas shot 64-68 over the weekend to equal the lowest final 36-hole score in tournament history. Lee Westwood birdied the final hole to finish runner-up for the second straight week. Bryson DeChambeau, last week’s winner, finished in a tie for third. A total of 66 balls – including 35 in the first round alone – found the water this weekend at the par-3 17th green at TPC Sawgrass. …Corey Conners, making just his second career start at The Players, posted back-to-back top 10 results for the first time since Nov. 2020. His final round 66 equaled the low round total of the day. …Adam Hadwin has yet to find the water on the par-3 17th green in his last 20 shots. …Nick Taylor went par-par-birdie-birdie at No. 17 this week.

Antoine Rozner of France holed a 60-foot birdie putt on the final hole for a one-shot victory in the Qatar Masters. Rozner’s second European Tour victory in just 29 events also qualified him for the WGC-Dell Technologies Match Play in two weeks in Texas. Guido Migliozzi, Darren Fichardt and Gaganjeet Bhullar all finished tied for second.

Keenan Huskey eagled the first playoff hole to earn medalist honors at the third of seven Mackenzie Tour-PGA TOUR Canada Qualifying Tournaments. The victory gives Huskey exempt status for the entire 2021 season after previously having exampt status for the first half of the 2019 season. Steven Fisk, who lost the sudden-death playoff, will earn exempt status through the halfway-point reshuffle alongwith Ryan Grider, Bennett Baker, Jonathan Hardee and amateur Logan Lockwood, who won a four-for-one playoff on the fourth extra hole to finish in the top six. …Riley Goss was the lone Canadian in the field, finishing in a tie for 78th.