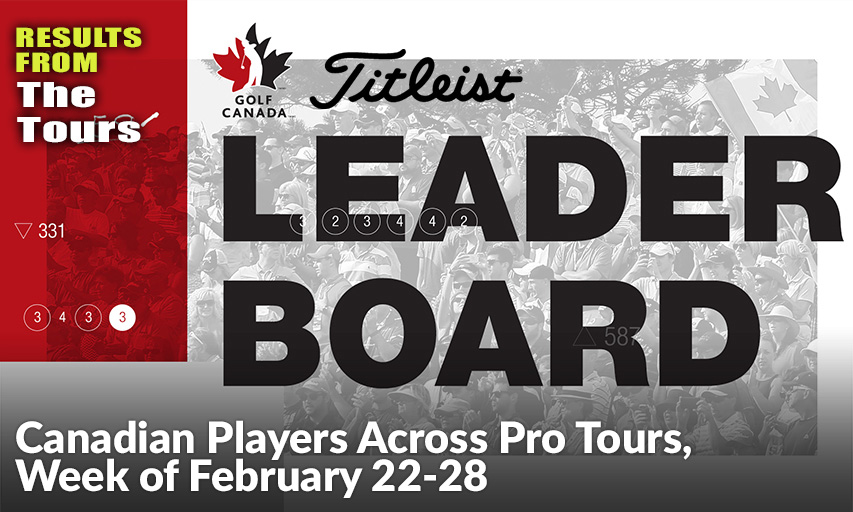 Branden Grace holed out for eagle on the par-4 17th and birdied the par-5 18th for a one-stroke victory at the Puerto Rico Open. It was an emotional victory for Grace following his father’s death in January after a month-long fight with the coronavirus. It was the second career PGA Tour win for the South African. Jhonattan Vegas finished second. The tournament was played opposite the World Golf Championship event in Florida. Grace earned a two-year PGA Tour exemption and a spot in the PGA Championship in May, but not the Masters in April. …Roger Sloan posted his second best result of the PGA Tour season. …Taylor Pendrith’s opening round 66 was just one shot off the low round of the day. He was making just his fifth career PGA Tour start. …Michael Gligic snapped a string of six straight missed cuts. …Quebec golfer Yohann Benson failed to qualify for the tournament, losing in a three-way playoff for the final spot at the Monday qualifier. …Adam Svensson took part in the Monday qualifying tournament for the PGA’s Puerto Rico Open and missed qualifying for a three-man playoff for the final spot in the tournament by one stroke

Collin Morikawa fired a 3-under 69 on Sunday for a three-shot victory in the WGC-Workday Championship.  Morikawa – the reigning PGA Champion – became the 24th player to win a major and a World Golf Championship title since this series began in 1999, joining Tiger Woods as the only players to win both before the age of 25. Brooks Koepka, Viktor Hovland and Billy Horschel all finished tied for second. A number of players wore red shirts and black pants as a show of support for Woods who is recovering from career-threatening leg injuries suffered in a car crash in Los Angeles last Tuesday. …Mackenzie Hughes, making his fourth career WGC start, had just one sub-70 all week, finishing in a tie for 44th. He was the only Canadian entered in the event.

Nelly Korda finished with 12 straight pars for final round 69 to win the Gainbridge LPGA. Korda won for the first time on American soil – her other three LPGA wins were in Australia and twice in Taiwan – and she joined her older sister, Jessica, who won the season-opening Tournament of Champions last month in Orlando. Annika Sorenstam, playing competitively after 12 years of retirement, made the weekend cut but finished last out of 74 players. …Brooke Henderson’s final round 74 snapped a streak of seven-consecutive sub-par rounds.

Kevin Sutherland birdied two of the final three holes for a two stroke win over Mike Weir at the Colorguard Classic. Weir, who started the day with a two shot lead, bogeyed two of his final three holes for a final round 73. The 2003 Masters champion has twice been runner-up on the PGA Tour Champions since joining the 50-and-over circuit. He was looking for his first win at a PGA Tour-sanctioned event since 2007.  Phil Mickelson’s attempt to win in his first three PGA Tour Champions starts never materialized as he finished 11 shots back. …For the first time in three tournament starts Stephen Ames failed to finish under par