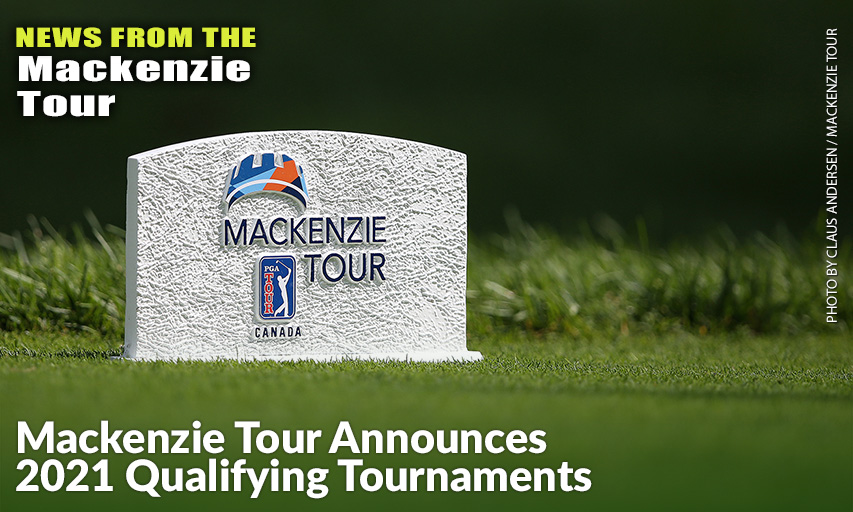 PONTE VEDRA BEACH, Florida — The Mackenzie Tour – PGA TOUR Canada never was able to play any of its 2020 season as complications at the Canada-U.S. border caused by COVID-19 prohibited the Tour from playing its eighth season. Even with that setback, the Mackenzie Tour is preparing for its return to competition in 2021, announcing its Qualifying Tournaments that will fill out the membership roster for the upcoming season.

The Mackenzie Tour plans to open registration for its Qualifying Tournaments on January 18, with six qualifiers set for the U.S., and one, the traditional Canada Q-School, in Courtenay, British Columbia, in late-May. Players can sign up here. Although the Canadian border is currently closed to non-essential travel, the Tour will conduct Qualifying Tournaments now in order to prepare for the potential lifting of this restriction prior to the traditional late-May start to the Mackenzie Tour season.

“We can only go forward with a 2021 season if we complete all our Qualifying Tournaments. Because the bulk of those are held in the U.S., where permitted, we will proceed with these tournaments in a safe and responsible manner,” said Scott Pritchard, Mackenzie Tour Executive Director. “Once those tournaments are completed and we have a membership, we will be in a position to conduct a season when we are given the go-ahead from the various health authorities with which we are in discussion.”

Prior to the cancellation of the 2020 season, the Mackenzie Tour held three Qualifying Tournaments. Those players’ memberships are still intact, Pritchard noted.

“We will absolutely honor the status of all the players who played in our Qualifying Tournaments in Texas, Florida and Alabama a year ago. Their statuses will carry over to this upcoming season, and we will see additional members join the ranks at our 2021 Qualifying Tournaments,” Pritchard continued.

The first Qualifying Tournament will be February 23-26 at The Club at Weston Hills in the Fort Lauderdale, Florida, suburb of Weston. The following week, the Tour moves north in the Sunshine State, to Howey-in-the-Hills and Mission Inn Resort and Club for the tournament set for March 2-5. The following week, the Tour returns to the Robert Trent Jones Golf Trail at Highland Springs in Dothan, Alabama, March 9-12. Following a one-week break, the fourth Qualifying Tournament takes place in San Jacinto, California, at Soboba Springs Golf Course on March 23-26. The next week, March 30-April 2, The Wigwam Resort in Litchfield Park, Arizona, is the site. On April 6-9, players will compete at Callaway Gardens in Pine Mountain, Georgia. The last of the Mackenzie Tour Qualifying Tournaments is May 24-27 at Crown Isle Resort in Courtenay if government restrictions are lifted. Each qualifying tournament is 72-hole medal play contested over four days.

The Tour is planning to play its official season from late-May to mid-September and will announce specific dates and sites in the near future.

A complete PGA TOUR Latinoamérica tournament schedule will come out in mid-to-late January, with an anticipated restart to the season in March and concluding in early to mid-June. This will occur after PGA TOUR Latinoamérica was the one International Tour that held official tournaments in 2020. Last month it resumed its season that began in March prior to an eight-month hiatus. The Tour played the Shell Open, the second event of its wraparound 2020-21 season, in Miami in mid-December, followed by the Puerto Plata Open in the Dominican Republic the week before Christmas. MJ Maguire won the Shell Open, and Brandon Matthews captured the Puerto Plata Open. Maguire currently leads the Tour’s points list by 32 points over No. 2, Brazil’s Alex Rocha. Matthews is No. 3.

“It was truly gratifying to return to action in Miami. We talked to so many players who were anxious to resume playing, and to have that two-week stretch in Florida and the Dominican Republic gave us three events under our belts as we head into 2021,” said Todd Rhinehart, PGA TOUR Latinoamérica Executive Director.

Because of the pandemic and the situation in Asia not showing significant improvement, officials put forth every effort to find a way to play but realized the obstacles are too difficult to overcome. PGA TOUR Series-China will not conduct tournaments in 2021.

“We remain committed to the region and want to do everything we can to give competitive opportunities for players in Asia and from the Pacific Rim,” said Greg Carlson, PGA TOUR Series-China Executive Director. “We are trying to pursue other opportunities for our players to play in 2021. We will also take this pause and evaluate what we might be able to do in 2022.”

The PGA TOUR began its foray into International Tour golf in 2012 with the creation of PGA TOUR Latinoamérica. The Mackenzie Tour followed in 2013, with PGA TOUR Series-China coming on board in 2014. Numerous players have taken advantage of the path that all three Tours offer, moving to the Korn Ferry Tour and eventually the PGA TOUR. Alums from all three Tours have won on the Korn Ferry Tour, former PGA TOUR Latinoamérica and Mackenzie Tour players have won PGA TOUR events and PGA TOUR Series-China and the Mackenzie Tour have had player representation on Presidents Cup International Teams.