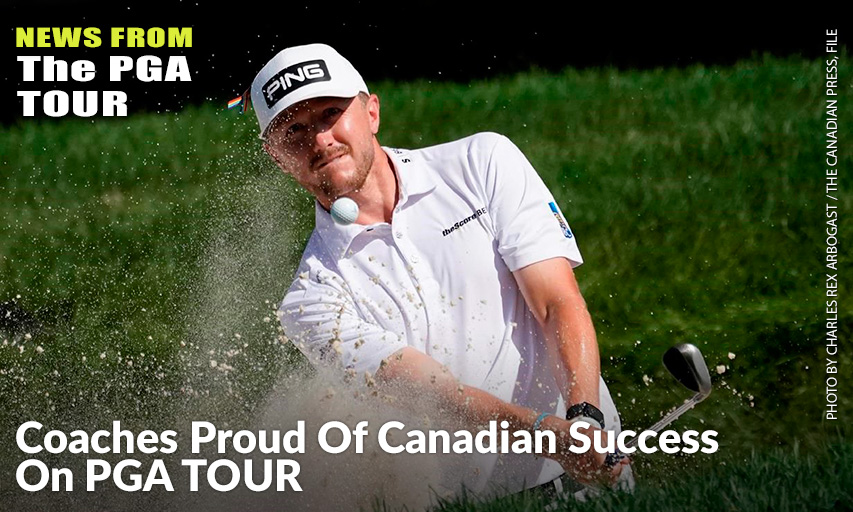 By JOHN CHIDLEY-HILL, The Canadian Press

Although 2019-20 was a strange, start-and-stop season on the PGA TOUR, it was also arguably the best-ever campaign for Canadian golfers.

Mackenzie Hughes, Adam Hadwin, Corey Conners, and Nick Taylor have at various points this season all been in the top 100 of the men’s world golf rankings — a new high for Canadian players — and Taylor Pendrith tore it up on the second-tier Korn Ferry Tour.

Derek Ingram, the men’s head coach for Golf Canada, has worked with all five players and said he believes that their success this past season — after the PGA resumed following a three-month break caused by the COVID-19 pandemic — is because of the group’s esprit de corps.

"There’s just a real great Team Canada feel on the PGA TOUR," said Ingram. "These guys eat together, they train together, they practise together, in the evenings because of the bubble they’re having dinner together. Each one of them pushes them to get better."

Ingram added that there are other factors to the Canadian contingent’s success. He credits the influence of Mike Weir of Brights Grove, Ont., whose 2003 Masters win served as an inspiration for an entire generation of Canadian golfers as well as the development programs of provincial golf associations.

Hughes, from Dundas, Ont., drew most of the attention to close out the 2019-20 season, which officially ended with the final round of the TOUR Championship.

After missing nine of 11 cuts to start the season, Hughes finished second at the Honda Classic on March 1. Hughes refocused himself during the pandemic break and rocketed up the FedEx Cup standings, qualifying for the 30-player TOUR Championship with a nail-biting finish at the BMW Championship where he tied for 10th.

Hughes finished the season 14th in the FedEx Cup standings after a solid performance at the TOUR Championship, the highest-ever year-end ranking for a Canadian. He’ll also play in next week’s U.S. Open along with Hadwin, Conners, and Pendrith in the second week of the 2020-21 season.

"They’re doing unreal," said Ingram. "Really, the credit goes to the players and their families and how hard they’ve worked. I just can’t tell you how thrilled I am for them as a fan and as a coach of the national team."

Pendrith, who does not yet have full PGA TOUR status, earned his way into the U.S. Open with his strong and consistent play that has put him at No. 4 on the Korn Ferry Tour’s points list heading into this week’s Evans Scholars Invitational.

Another important factor has been the role of NCAA programs in developing professional golfers.

Herb Page of Markham, Ont., retired as the head coach of Kent State University’s men’s golf team last summer but is still in touch with Hughes, Conners, and Pendrith, all of whom he coached through their collegiate days at the Ohio school.

"They’ve just got someone to lean on, they’ve got that friendly face," said Page on how camaraderie has benefited the Canadians. "It’s a tough, lonely grind out there, especially this year when you can’t bring your wife or your kids.

"I think even moreso this year (those friendships) are important."

Although Hughes, Hadwin, Conners, and Taylor get the lion’s share of the attention among the Canadians on tour, they’re not the only ones plying their trade on the PGA.

Graham DeLaet of Weyburn, Sask., will make his return to action at the season opening Safeway Open at Silverado Resort and Spa North in Napa, Calif. He hasn’t played since January when back pain derailed his season.

Roger Sloan of Merritt, B.C., David Hearn of Brantford, Ont., and Michael Gligic of Burlington, Ont., will also be in the field. Ingram said that the depth of Canadian talent in men’s professional golf is also a boon for the sport.

"I’m just thrilled for golf in Canada and for the guys that have been working hard for a long time," said Ingram. "We’ve never been deeper."

Garrett Rank of Elmira, Ont., Canada’s top-ranked amateur of either gender who is also an NHL referee, is in the field at the Evans Scholars Invitational at Chicago Highlands Club in Westchester, Ill. Pendrith, of Richmond Hill, Ont., Adam Svensson of Surrey, B.C., Ben Silverman of Thornhill, Ont., Vancouver’s Stuart Macdonald, and Matt Hill of Forest, Ont., also are entered.

China’s Yi Cao is atop the Canada Life Series Standings with 853.333 points heading into the first round of the Canada Life Series Championship at TPC Toronto in Caledon, Ont. South Africa’s Albert Pistorius (835.000) and Calgary’s Evan Holmes (631.000) round out the top three of the four-event mini-tour’s standings heading into the climactic tournament.

Brooke Henderson of Smiths Falls, Ont., and Hamilton’s Alena Sharp are the only Canadians in the field at the ANA Inspiration at Mission Hills Country Club, Dinah Shore Tournament Course in Rancho Mirage, Calif. It’s the second major of the LPGA Tour’s compressed season.