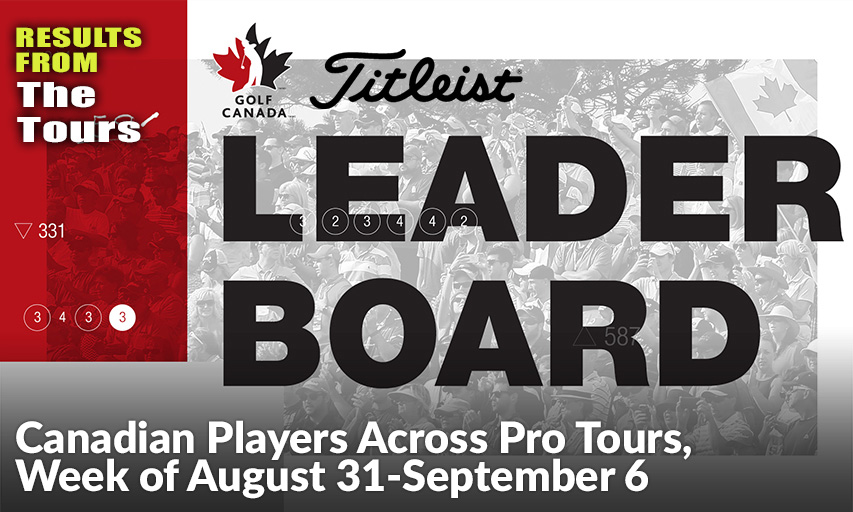 Dustin Johnson tapped in for birdie on the last hole for a final round 68, giving him a three-shot victory over Justin Thomas and Xander Schauffele in the Tour Championship. Johnson also won the $15 million prize that comes with it, the biggest in golf. He became the first No. 1 seed at the Tour Championship to win the FedEx Cup since Tiger Woods in 2009. In his last four tournaments, Johnson won twice and finished runner-up in the other two. Schauffele actually had the lowest score over 72 holes at 15-under 265, but he started at No. 14 in the FedEx Cup, seven shots back when the tournament opened.  …Mackenzie Hughes earned $620,000 for his 14th place result. He recorded top 15 results in all three FedEx Cup playoff tournaments.  His third round 66 was just two shots off the low round of the day.

Australian Brett Drewitt carded a final round 3-under-68 to win the Lincoln Land Championship for his first Korn Ferry Tour title. Harry Hall, Ben Kohles and Austen Truslow all finished in a tie for second, one stroke back. Truslow and Kohles each missed long birdie attempts on the final hole which would have forced a playoff …Adam Svensson recorded his sixth top 25 result in 11 tournaments. …Jared du Toit finished in a three-way tie for first at the Monday qualifying event to make his Korn Ferry Tour debut. …Stuart Macdonald is a combined 15-under par in his last three tournaments. …Michael Gligic made his first cut in three Tour starts

John Catlin survived difficult final round conditions, shooting a 4-over 75 to hold on for a one-shot victory in the Andalucia Masters. Catlin became the first American since Tiger Woods to win at Valderrama. His 2-over 286 was the first time a regular European Tour event was won with a score over par since the Spanish Open – which was also played at Valderrama in 2016. Martin Kaymer missed a chance to end a six-year title drought, missing a pair of birdie putts on the 16th and 17th holes. Kaymer has now gone 156 events since his last victory in the 2014 U.S. Open. …There were no Canadians entered in this event.

Kim Kaufman shot a final round 69 for a one stroke victory at the Four Winds Invitational. It was her third career Symetra Tour title. Robyn Choi and Bailey Tardy finished tied for second. …Maddie Szeryk has made two of four cuts since the tour restart. …Jaclyn Lee made her first ever Symetra Tour start

Albert Pistorius made an 8-foot birdie putt with three holes to play to break a logjam atop the leaderboard and win the Canada Life Series at TPC Toronto: Heathlands Course event by one stroke. The victory was Pistorius’ first professional win and more importantly, earned him 500 points to move into second place on the points list with one event to play.  Andrew J. Funk, Callum Davison and points leader Yi Cao all finished tied for second. …Of the five amateurs who made the cut, NHL referee Garrett Rank – ranked 44th in the World Amateur Golf Rankings – was the low amateur finishing sixth. Golf Canada National Junior Squad members Cougar Collins finished tied for 52nd.