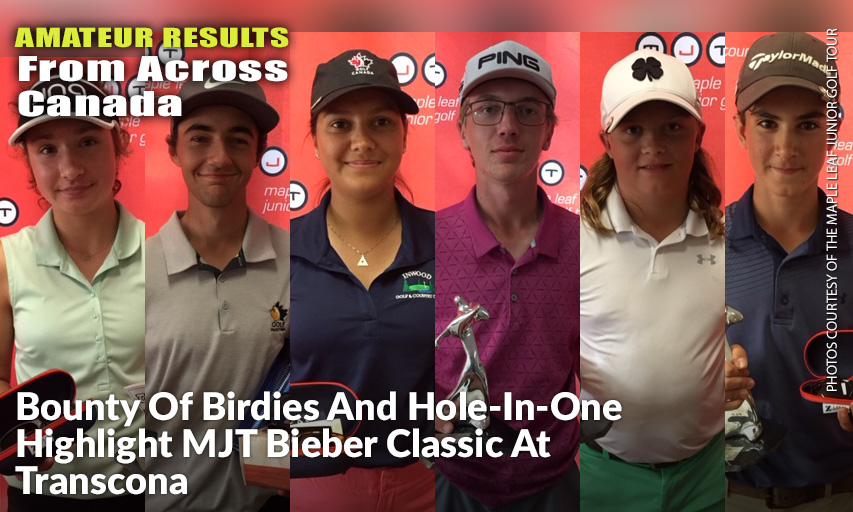 There was no shortage of birdies by Noah Fiks in the MJT Juvenile Boys Division. The 16-year old golfer from Winnipeg made a competition-low 13 birdies, blazing his way through 36 holes to fire rounds of 67 and 68 (135) for a convincing win. Fiks got off to the start he wanted, making five birdies in his first seven holes of the event. He never took his foot off the gas pedal from there earning his third win in four starts this year on the MJT. “I putted very well and my distance control with my wedges was on point,” said Fiks. “It feels amazing (to win). I really appreciate Garth, Ed and the rest of the MJT staff for all the work they put into all of the events this season. I really enjoyed every one of them.”

The MJT Junior Boys Division also saw lots of action around the leaderboard on Monday and Tuesday. Jacob Armstrong of Winnipeg returned to the MJT for his first event in 2020 and won after shooting great scores of 70 and 73 (143). The 18-year old MJT veteran made four birdies and many pars to take home the Hoselton trophy. “It feels great – I’ve had a shaky year so far, so to end my junior career with a win, I couldn’t be happier,” said Armstrong. “Thank you so much for giving me an opportunity to grow my game. I don’t know what I’ll do without the MJT.” 17-year old Eric Prokopowich, of Dauphin, MB, fired scores of 73 and 72 (145) to finish tied for second place and impressed the field recording a Hole in One on the 13th hole at Transcona Golf Club on the second day. Winnipeg golfer Trey Ross, 17, fired rounds of 72 and 73 (145) to finish tied for second place with Prokopowich.

Winnipeg’s Terence Rafferty, 13, finished with solid scores of 75 and 74 (149) to win the MJT Bantam Boys Division by one shot. Rafferty made a key birdie on the 17th hole of the second round to preserve his lead and take home the Hoselton trophy. “It feels amazing because I finally got to win a tournament this year,” commented Rafferty, who has been around the top of the leaderboard this year and defended his title from last year.

12-year old Ryan Tuck recorded rounds of 76 and 80 (156) to win the MJT Peewee Boys Division title. The Winnipeg player started off on the right foot, playing his first nine holes on the first day at even par. “I tried to stay positive out there,” commented Tuck. “[The MJT events] are fun and worth going in.”

Mikyla Albert picked up her second consecutive MJT win in the Girls 15-19 Division at Transcona Golf Club. The 18-year old Selkirk, MB, resident carded rounds of 74 and 80 (154) making an eagle and six birdies over the two rounds, stating, “I was able to keep calm and make some clutch putts.”

Winnipeg’s Addison Kartusch, 13, returned to the winner’s circle in the MJT Girls U15 Division. Kartusch, who picked her first win at Winkler Centennial Golf Course, earned her second win of the season at Transcona Golf Club shooting scores of 87 and 82 (169). “I knew that one hole wasn’t going to determine how I played,” commented Kartusch, who mentally persevered through the competition. “It feels really cool (to win). This was a learning year for me so this (win) is kind of surprising.”

Full results from the event, which concludes the 2020 season in Manitoba, can be viewed here. The prestigious MJT National Championship presented by TaylorMade and adidas Golf at Morgan Creek Golf Course will take place from October 9 to 12 in Surrey, BC, and players who have qualified will be notified shortly. More information is available at www.maplejt.com.