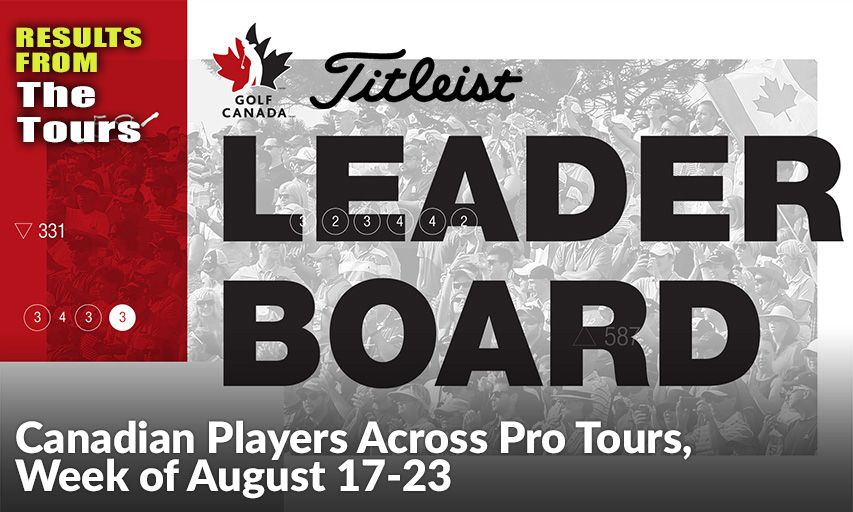 Dustin Johnson played the final two holes in near darkness after a late storm delay and finished with a birdie for an 8-under 63 and an 11-shot victory over Harris English in The Northern Trust. It was the 22nd victory of his PGA Tour career and his fifth FedEx Cup playoffs event win, tying him with Rory McIlroy for most. It also returned him to No. 1 in the world. He finished at 30-under 254 – only the third player to finish 30 under, joining Ernie Els and Jordan Spieth. …Mackenzie Hughes, who posted four sub-70 rounds for the first time since June, finished just two strokes outside a top 10 finish. It also equalled his best result in a FedEx Cup playoff event. …Corey Conners posted his best result in the last four PGA Tour events. …Despite missing the cut both Nick Taylor and Adam Hadwin have qualified to play in the second of three FedEx Cup playoff events.

France’s Romain Langasque carded a bogey-free 6-under 65 for a two-stroke victory at the Wales Open for his first European Tour title. The 2015 British Amateur champion overcame a five-stroke deficit Sunday to earn a spot next month in the U.S. Open. ..For the first time this season, Aaron Cockerill failed to post at least one round under par in a tournament in which he has made the cut.

Sophia Popov had five birdies in a final round 68 to finish at 7 under to win the Women’s British Open at Royal Troon to become the first female German major champion. The 304th-ranked player in the world lost her LPGA Tour card last year and only qualified for the Women’s British Open with a top-10 finish two weeks ago at the Marathon Classic. The tournament was the first women’s major of a pandemic-disrupted year. It was played without spectators at Troon because of coronavirus restrictions. …Alena Sharp recorded her career best finish at the Women’s British Open  …Brooke Henderson was making his first competitive start since January. The missed cut was her first in the last 20 tournaments dating back to May 2019.

Shane Bertsch eagled the first hole of a four-man playoff to win the Charles Schwab Series at Bass Pro Shops Big Cedar Lodge in just his second PGA Tour Champions start. Kenny Perry, Bernhard Langer and Glen Day all finished runner-up. The Charles Schwab Series at Ozarks National will start Monday with Phil Mickelson making his Tour Champions debut after missing the cut at The Northern Trust. …Mike Weir’s second 64 was his lowest career round on the Tour and tied him for the low round of the day

Fatima Fernandez Cano of Spain shot a final round 3-under 69 to finish at 12 under to win the IOA Championship for her first Symetra Tour title. With the win she jumped to third in the race for five LPGA Tour cards available for 2021.

Yi Cao led from start to finish to win the Canada Life Series at Bear Mountain: Valley Course by eight strokes over Golf Canada Young Pro Squad member Joey Savoie and Albert Pistorius. With the win, and a tie for third two weeks ago, Cao now sits first in the Points List which carries with it conditional status on the Mackenzie Tour next year and a guaranteed six tournament starts. Savoie, who skipped the Series opening event last week, shot a course record 7-under-64 in the final round and currently sits fifth in the points race. Players who finish 2-through-5 on the points list also earn conditional status on the Mackenzie Tour along with two guaranteed starts in 2021.

POINTS LEADERS THROUGH 2 OF 4 EVENTS: