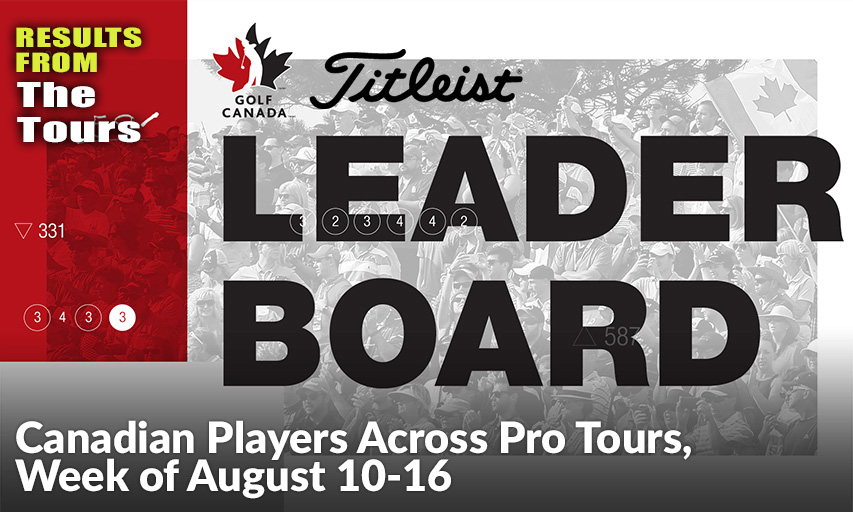 Jim Herman overcame a four shot deficit, shooting a final round 63 for a one stroke victory at the Wyndham Championship. Billy Horschel had a final chance to tie on the final hole, but his 8-foot birdie putt slid left of the cup. The victory enabled Herman to get into the playoffs, jumping from 192nd to 54th in the race for the top 125 spots. …Roger Sloan held a share of the lead after shooting a career-low 62 … Michael Gligic has shot sub-70 in six of his last eight competitive rounds. …Corey Conners finished 55th in the FedEx Cup standings and will be one of three Canadians who have qualified for the FedEx Cup Playoffs.

Stephan Jaeger carded a final round 68 for a one-stroke victory at the Albertsons Boise Open – the first of three events in the Korn Ferry Tour Championship Series.  It was Jaeger’s fifth career tour title. Dan McCarthy and Brandon Wu each finished in a tie for second. …Taylor Pendrith recorded his seventh top 15 result in nine tournaments this year. It was also just the third time this season he has carded four sub-70 rounds…Adam Svensson’s opening round 65 was just three strokes off the clubhouse lead. …In the five cuts he’s made this year, Ben Silverman is a combined 30-under par

Sam Horsfield shot a bogey-free round of 67 to capture his second title in three weeks on the European Tour by winning the Celtic Classic by two strokes. Horsfield did not have a professional win to his name before the six-week U.K. Swing. Now, he has two victories in three tournaments. Thomas Detry, who finished a shot behind Horsfield two weeks ago at the Hero Open, finished runner-up again. …Aaron Cockerill posted his best finish of the season and his first top 20 result on tour since last October.

Stacy Lewis holed a 20-foot long birdie putt on the first playoff hole to win the Ladies Scottish Open for her first title in nearly three years. Lewis started the final round a stroke off the lead  and shot 1-over 72 to join final round leader Azahara Munoz, Cheyenne Knight and Emily Kristine Pedersen in a four-way playoff.

Jerry Kelly  shot a final round 69 which included a hole-in-one on the 12th hole, lifting him to a two-shot victory at the Bridgestone Senior Players Championship. It was his first major on the PGA Tour Champions. Scott Parel’s runner-up finish was enough to move him to the top of the Charles Schwab Cup standings. Kelly and Parel were the only players to finish under par. …Mike Weir notched his first top 10 result In just his second career Champions Tour start. …Stephen Ames’ +15 total is his highest finishing score in his Champions Tour career.

Sarah White carded a final round 4-under 68 for a one-stroke victory over Casey Danielson and Sophia Popov at the Founders Tribute. White, who turned pro back in January, won as non-member of the tour and accepted membership after the victory. …After playing in her first LPGA event last week in over a year due to injury, Jaclyn Lee made her first career start on the Symetra Tour