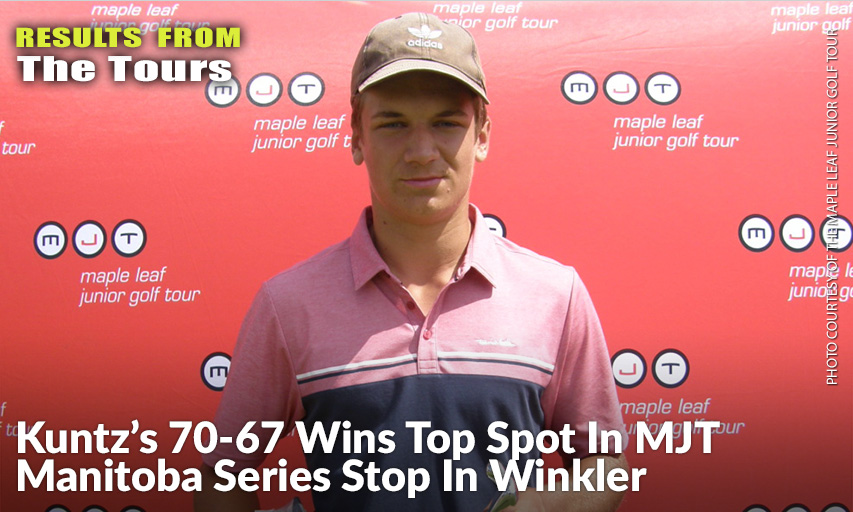 WINKLER, Manitoba — The Maple Leaf Junior Golf Tour continued with its 2020 Manitoba schedule in the city of Winkler on August 4 and 5, where the MJT Manitoba Series at Winkler Centennial Golf Course played out under the new player health and safety protocols, awarding young athletes titles in six divisions.

Braxton Kuntz of Winnipeg, MB, shone in the spotlight in the MJT Juvenile Boys Division at Winkler Centennial Golf Course after firing outstanding scores of 70 and 67 (137). Kuntz found himself tied for the lead after the first day of play and was able to take it low on the second day to win the division by seven shots. “I feel really proud of how I played and bounced back,” commented Kuntz, 16. “I was able to beat some very good players and that feels great.”

Holding his ground in the MJT Junior Boys Division was 17-year old Trey Ross. The Winnipeg golfer carded great back-to-back scores of 71 (142) to give himself a commanding seven-shot win in the division. “My goal was to keep the ball in play and hit greens,” commented Ross. “I was very relieved to do that and win.”

Headingley, MB, player Grady Chuback, 14, secured the win in the MJT Bantam Boys Division with solid scores of 75 and 76 (151). Chuback put himself in a two-shot lead on the first day and was able to hold on to that right to the end of the event. “I just tried to keep it simple and play golf,” remarked Chuback. “I tried not to complicate things and have fun.”

MJT veteran-champion Mikyla Albert added another Hoselton trophy to her repertoire in the MJT Girls 15-19 Division. The Selkirk, MB, player fired 74 and 75 (149) to secure a dominating victory after coming off an unfortunate injury. “I made putts when I needed too,” commented Albert. “I feel great to win coming off my injury.”

The MJT Peewee Boys title went to 12-year old Brayden Boge, of Winnipeg, who picked up his second 2020 MJT Junior Tour win. Boge recorded scores of 76 and 79 over the two days to win the division in convincing fashion. “I had a bad start,” commented Boge, who was able to turn his game around. “I set new goals for myself and I was able to accomplish them.”

13-year old Addison Kartusch, of Winnipeg, MB, shot 91 and 81 (172) in the MJT Girls 15-19 Division to win by two strokes after a remarkable 10-shot improvement over the two days. When asked about her round, Kartusch commented on her ability to stay mentally sharp by saying, “Whenever I had a bad hole, I would move on and focus on the next one.”

Full results can be viewed here. The next Manitoba stop, the MJT Manitoba Series at Carman Golf Club, will take place on August 13 and 14 in Carman. Registration is online at www.maplejt.com.