A Capsule Look At 10 Contenders For The PGA Championship 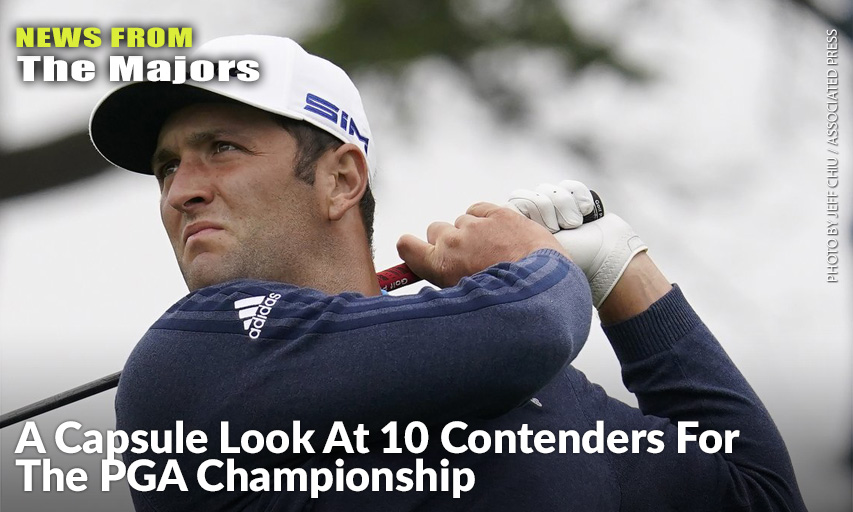 A capsule look at 10 players in the 102nd PGA Championship at the TPC Harding Park in San Francisco (listed in predicted order of finish):

PGA Championship Memory: Posting all four rounds in the 60s in 2018 at Bellerive to tie for fourth.

Backspin: Of the six players who reached No. 1 in the world without having won a major, Ian Woosnam took care of that the quickest by winning the Masters the next week. Rahm has won in each of his four full seasons since turning pro, though he has seriously flirted with major contention only at Bellerive two years ago. At 25, he’s too young to be the best without a major. But expectations start now.

PGA Championship Memory: A tie for third at Bethpage Black last year, his best finish in a major.

Backspin: California majors mean a little more to Cantlay, a player who does everything extremely well except for winning. Even after losing four years of his career to a serious back injury, no one in the top 10 has won with less frequency. That’s bound to change.

Backspin: He has the experience from having won at Harding Park five years ago in the Cadillac Match Play. But he has gone 19 majors since his fourth major title at the 2014 PGA Championship, and except for the 2018 British Open, he hasn’t been in serious contention on the back nine. He’ll be under greater scrutiny at the Masters going for the career Grand Slam. But this major drought is becoming an issue.

PGA Championship Memory: Still waiting to make one. In three appearances, he has yet to break par.

Backspin: He has been listed as a co-favorite with McIlroy from having a victory among his seven straight top-10 finishes, but mostly from his power-based approach to the game. He is getting most of the attention from adding 40 pounds of bulk, creating 200 mph ball speed and shrinking golf courses. This will be his first major test.

PGA Championship Memory: His 6-foot par putt on the 72nd hole in 2000 at Valhalla to get into a playoff with Bob May, whom he beat for his third straight major.

Backspin: The PGA Championship will be his fourth tournament of the year and not even Woods knows what to expect. He skipped three events before the pandemic-induced shutdown when his back didn’t feel right. It bothered him for one round at the Memorial. If he feels good, he’s a factor. Woods won at Harding Park in a playoff over John Daly in 2005.

Backspin: Running out of time to extend his streak of winning in each of his first four seasons on the PGA Tour. Schauffele has the power and the attitude to do well at Harding Park, and he has challenged in every major except the PGA Championship. He has an extraordinary amount of fight in his game.

Backspin: When he tied for 18th at the Memorial, it ended a peculiar streak of either finishing in the top 10 or missing the cut. Thomas has won in each of his six years on the PGA Tour, including Kapalua this year, and his victory at the World Golf Championship last week elevated to No. 1 again. Inconsistency with the putter has been his biggest obstacle this year.

PGA Championship Memory: The 4-iron into the 16th at Bellerive for birdie that effective wrapped up a thrilling back nine that led to victory.

Backspin: No one has ever won the PGA Championship three straight times in stroke play. Koepka comes into this major with a left knee that still hurts and only two top 10s since last season ended. But he missed three months recovering from injury and three months because of the pandemic. But he tends to raise his game for the majors, and he showed solid form last week at the FedEx St. Jude Invitational, where he was runner-up.

PGA Championship Memory: Grounding his club in sand that he didn’t realize was a bunker at Whistling Straits for a two-shot penalty that cost him a spot in the 2010 playoff.

Backspin: The best to never win a major is one list. Johnson is clearly on top of the other list: The best to win only one. He turned 36 in June and is eager to add to his 2016 U.S. Open title. Coming off a victory in the Travelers Championship, he shot 80-80 at Memorial and withdrew after a 78 at the 3M Open.

PGA Championship Memory: A runner-up finish to Jason Day at Whistling Straits in 2015 that put him at No. 1 in the world for the first time.

Backspin: This is the fourth time Spieth goes into the PGA Championship with a shot at the career Grand Slam. He has never had so little attention on him because he now has gone three full years since his last victory, and not many chances to win. He is making progress. He is always making putts. He is lacking any momentum.