Adam Scott Back In PGA Chase After Long Break Down Under 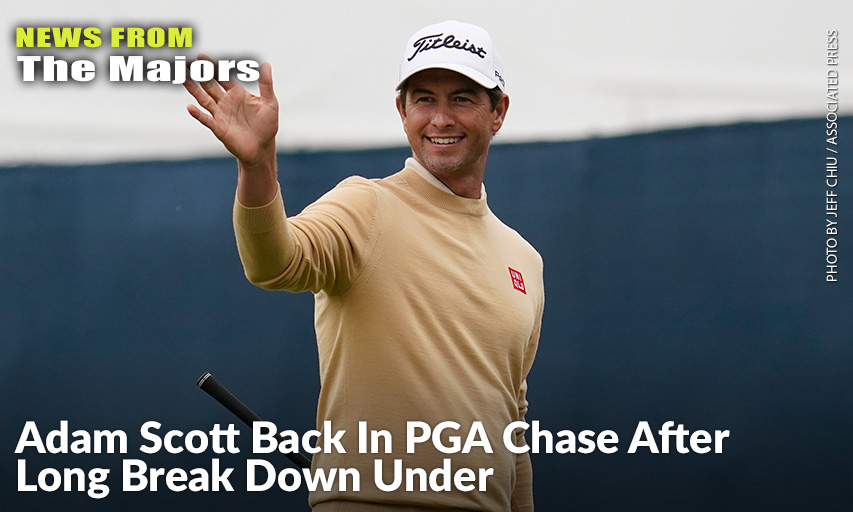 When he finally showed up at the PGA Championship, everyone else ranked inside the top 50 had already revved up for the season's first major by playing at least one tournament somewhere. But Scott, who checked in at No. 10, is just as eager as the other 49 to find out who got the work-life balance experiment right.

Nearly every other pro rushed back from the pandemic-induced layoff to get back on the course beginning in mid-June. Scott took a pass, instead skipping both Colonial and the Memorial - tournaments he'd won previously - and instead enjoyed a rare long break back home in Australia.

He had misgivings about travelling at first, then concerns that the protocol in place to protect golfers "wasn't tighter than it is." What kept him home, finally, was simply the chance to kick back and relax. Scott celebrated his 40th birthday with family, relearned the pleasures and demands of full-time parenting and reconnected with old pals hanging out at the local Caloundra Golf Club, even volunteering at one point to wash the golf carts.

"It had been probably 20 years since I'd been home at that time of year and for that length of time, and I certainly enjoyed it very much, given whatever restrictions we were still under," he said.

"It was nice to be there with the family, and I think in some way it's going to prolong my career. . Some of those things," he added a moment later, "are things that I don't get to experience that much."

What Scott does have plenty of familiarity with is both the PGA Championship - this is his 20th - as well as the host Harding Park Golf Club. Enough, anyway, that Scott parlayed all that experience into a couple of good jokes.

Reminded that he'd recorded more rounds of 65 or better than any golfer in PGA Championship history, he quipped, "just not four days in a row."

Later on, when a reporter pointed out that Scott was one of only three golfers to have competed in three previous events - the 2005 World Golf Championship, 2009 Presidents Cup and the 2015 Match Play - at the famed San Francisco municipal course, he broke into a grin.

"I think that's a little surprising," he began, "but I seem to be getting on these kind of 'older' lists much more often these days."

He's not kidding - at least not entirely - about that last part. If there's a knock against the handsome, affable Aussie, it's that he's an underachiever. Scott has 14 PGA Tour wins and more than double that number around the world, but the 2013 Masters is his only major. That lone entry on an otherwise glowing resume in large part is why he's back on the job, and likely to stay up until the Masters, now rescheduled to November.

"There's no doubt the majors are kind of what everyone's careers are defined and measured by at the end of the day," Scott said, adding, "I'd love to win a second major. It's all I focus on, really. This is a big opportunity for me, and so are the (seven other majors rescheduled over the) next 11 months."

Scott scraped some of the rust off his game recently at Congaree Golf Club in South Carolina, where he began his quarantine after arriving on these shores. But there wasn't much to begin with. He closed out 2019 by winning the Australian PGA Championship, took seven weeks off, and then claimed the Genesis Invitational at Riviera in February.

Whether that's preparation enough for a PGA Championship remains to be seen. But either way, Scott won't have regrets.

"Not that anyone is really burnt out, but given the circumstances and just seeing the rigmarole of the changes in protocols and things to get into the golf tournament, I can see potentially how some guys have kind of got a little bit worn out over the last weeks on tour," he said.

"I certainly don't feel," he added, "like I missed anything from that sense."