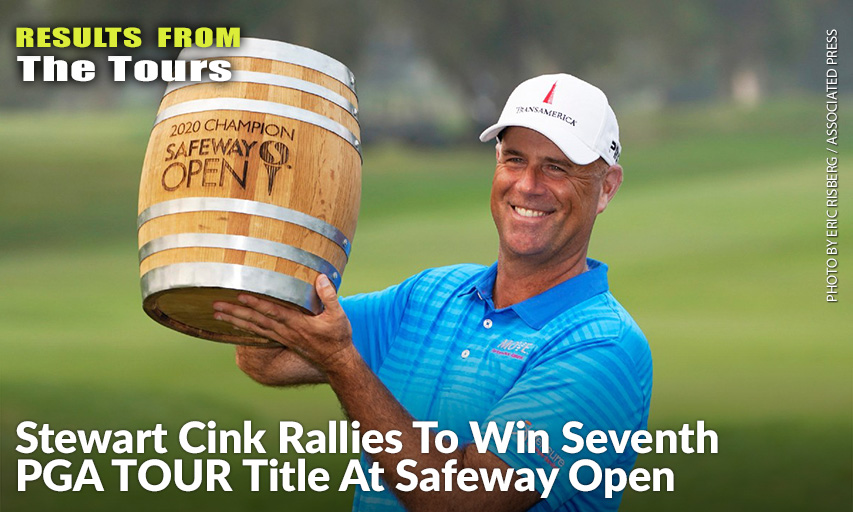 NAPA, California — Stewart Cink’s long wait is finally over. He doesn’t have to worry about being cast as a villain, either, as was the case when Cink outlasted fan favourite Tom Watson to win the 2009 British Open.

Sparked by a strong short game, Cink won the season-opening Safeway Open at 47 years old for his seventh PGA Tour victory and first since that win at Turnberry 11 years ago.

Making it more special? Cink won with 23-year-old son Reagan alongside as his caddie, with wife Lisa — in her fifth year of cancer remission — watching from beyond the ropes.

"I definitely had a lot of emotions out there today," Cink said. "I just was overcome at a few times with a feeling of gratitude and just feeling like how fortunate I am to be in the position that I’m in. It all just kind of poured together into feeling like, `Wow, this is really special."’

Cink closed with a 7-under 65 at Silverado Resort — rebounding from a bogey on the 17th with a birdie on the 18th — for a two-stroke victory over Harry Higgs.

Cink is the oldest PGA Tour winner since Phil Mickelson at 48 at Pebble Beach in February 2019. Cink’s last victory came at the expense of then-59-year-old Watson at Turnberry, with Cink winning a four-hole playoff.

That was somewhat of an awkward win because many fans were pulling for Watson, relegating Cink to basically a supporting role.

"I always felt like Tom deserved every bit of the accolades he got from his performance that week," Cink said. "People ask me this all the time, I feel like I won the Open Championship that year. I don’t feel like I took it out of Tom’s hands or I disappointed the world. I don’t mind sharing the spotlight with him for that. In the end I got the Claret Jug."

This time the spotlight was all Cink’s, sort of.

Reagan Cink convinced his father to let him caddie this week, and it wasn’t just ceremonial, either. Stewart Cink noted that his son gave him sage advice throughout the week, particularly as the two were walking off the second hole in the final round.

"He said, `Dad you know what, your tangibles are really, really good right now ? your club, your ball, your putting. Let’s just take care of the intangibles today.’ He made a great point," Cink said. "To do it with Reagan on the bag, his fourth time caddying, was a 25 cherries on the top."

Cink did it the old fashioned way [in the final round], with a short game that repeatedly put him in great shape on the greens. He one-putted 10 times, scrambled for pars after driving into the sand twice and had eight birdies to finish at 21-under 267.

Stuard, Cameron Percy, and James Hahn entered the day tied for the lead.

Percy (74) was done when he went double bogey, double bogey, bogey over a three-hole stretch on the front nine. Hahn (72) bogeyed three of the first six holes and couldn’t recover. Stuard was 1 over through eight and chased the leaders the rest of the afternoon.

Michael Gligic of Burlington, Ont., and David Hearn of Brantford, Ont., — the lone Canadians to make the weekend — tied for 14th at 15 under. Gligic fired a 4-under 68 while Hearn finished with a 69.

Cink’s bogey on the par-4, 362-yard 17th was only his second of the week and trimmed his lead to one stroke after Higgs eagled the par-5 16th to get to 19 under.

After hitting his second shot on the par-5 18th into the rough behind the green, Cink chipped to 3 feet to set up final birdie, then waited for the final three groups to finish.

"It’s been a while since I really played well for four rounds," Cink said. "Even here the second round I was not exactly outstanding, but I really played great over the weekend. I had a lot of good sort of vibes. It just felt like the right place for me to be up near the top of the leaderboard."

Higgs missed a 10-foot birdie putt on 17, then parred 18, a hole where he made an albatross [in the second round].

Redman, who began the day eight strokes behind the leaders, closed with six consecutive birdies to take a two-stroke lead. The 22-year-old stayed on top for about two hours until Cink’s final push.

"The last few holes are pretty easy and I just got hot," Redman said. "It happens, so it was awesome."