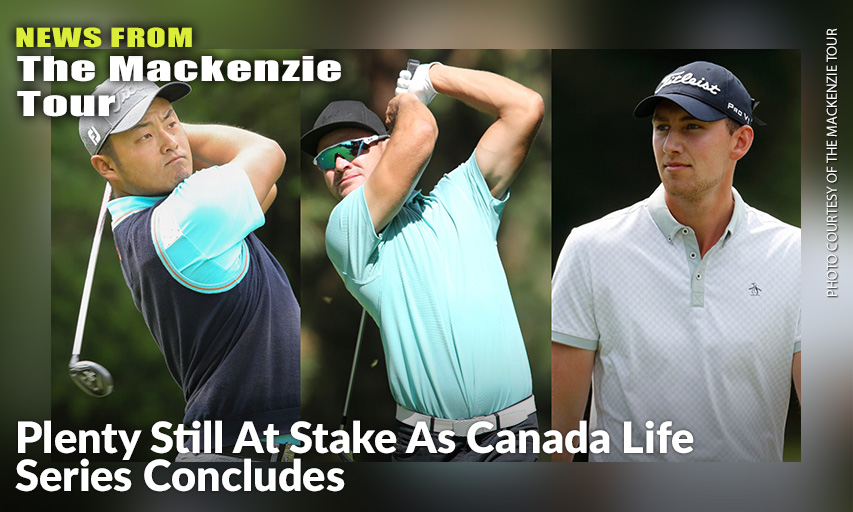 CALEDON, Ontario — Only 18.3 points separate Yi Cao and Albert Pistorius on the Canada Life Series Points List. Both players know it. That point gap represents the difference between earning six 2021 Mackenzie Tour tournament starts and an appearance in the 2021 RBC Canadian Open and not. Those perks are what Cao and Pistorius—as well as Even Holmes—will be playing for as the Canada Life Series wraps up its four-tournament schedule this week, again at TPC Toronto at Osprey Valley’s Heathlands Course. Action begins Wednesday, September 9.

Holmes joins Cao and Pistorius, the three winners of this season’s tournaments, as the only players who can still mathematically earn the Canada Life Series’ biggest bonuses. Holmes is 222.3 points behind Cao. Even with that trio dominating the conversation, there is still plenty on the line for the other 117 players in the field.

The players who finish Nos. 2-5 on the Points List will also earn 2021 Mackenzie Tour status and are guaranteed two tournament starts. Zach Anderson and Joey Savoie are currently holding down the fourth and fifth positions, with Callum Davison a little more than 16 points behind Savoie, in sixth place.

Holmes, Cao and Pistorius, in that order, won the first three Canada Life Series tournaments, with Cao the most consistent of the three during the Series’ three-week run. Cao has yet to finish outside the top three in any tournament, tying for third at the first tournament at Bear Mountain, winning the second Bear Mountain tournament and tying for second last week at the Heathlands Course.

Pistorius hasn’t been far behind, with a seventh-place showing and a tie for second to go with his breakthrough win a week ago. Holmes followed his win at Bear Mountain’s Mountain Course, adding a tie for 34th the following week at the Valley Course and a fifth-place showing last week at TPC Toronto.
Cao turns 30 on Thursday, and he’s hoping for a significant birthday present a day later.

“I’ve been consistently in the top five every week, which sets me up nicely and gives me a lot of confidence. If I have a strong finish [this] week, it will be the best 30th birthday gift,” said Cao, who was born in Beijing but emigrated to Canada during his teenage years. He still lives in the Greater Vancouver area.

As the picture of consistency in the first three tournaments, Cao’s high 18-hole score is an even-par 71 he’s shot three times. Everything else has been under-par, including his opening 64 last week that allowed him to split $2,750 with Pistorius as the low 18-hole shooter of the week. That money is courtesy of a consortium of past and present PGA TOUR players who are helping players still making their way in their careers. They are Stephen Ames, Corey Conners, Graham DeLaet, Michael Gligic, Adam Hadwin, David Hearn, Mackenzie Hughes, Ian Leggatt, Roger Sloan, Nick Taylor and Mike Weir. Cao is also combined 24-under in the three Canada Life Series tournaments, easily outdistancing the next-best player, Pistorius, who is 15-under.

Noticeably absent this week but for good reason is amateur Garrett Rank. He finished sixth at last week’s event and was set to play the season finale until he received an invitation to play in this week’s Evans Scholars Invitational on The Korn Ferry Tour. While the NHL referee and highest-ranked Canadian amateur (No. 44 in the World Amateur Golf Ranking) has played in four previous PGA TOUR tournaments, this will be his Korn Ferry Tour debut.

In 2018, the first year the Mackenzie Tour played the Osprey Valley Open presented by Votorantim Cimentos CBM Aggregates, PGA TOUR member and that season’s Player of the Year, Tyler McCumber, defeated Michael Gellerman by a shot. Gellerman, too, is a current PGA TOUR member.

The Heathlands Course opened in 1992, with the facility becoming the first TPC Property in Canada, beginning in 2017. The Doug Carrick design reflects a Scottish links feel, with dune-swept hills covered in fescue grass and strategically placed bunkers throughout all 18 holes. The par-71 layout measures 6,810 yards and features five par-3s—three on the back nine. The course is expected to play different from last week. The rough will be thicker, and the anticipation is the course will play much firmer and faster.

Also ending this week is the Canada Life-sponsored Birdies for Kids. For each birdie, Canada Life has donated $5 to two Canadian charities, Canucks Autism Network and Start2Finish. Start2Finish is the beneficiary of the two events at TPC Toronto at Osprey Valley. Canada Life has also donated $20 for each eagle, with $13,260 raised through birdies and eagles and a grand total $24,720 total including Canada Life-funded bonuses.

Action begins Wednesday at 8 a.m. Points List leader Cao is playing the first two days with Derek Gillespie and Bernard, that group teeing off at 8:10 a.m.

About the Mackenzie Tour-PGA TOUR Canada
The Mackenzie Tour - PGA TOUR Canada is a series of tournaments played across Canada and the United States each summer, where tomorrow’s stars begin the path to the PGA TOUR. The leading 10 point-earners at the end of each season earn status on the Korn Ferry Tour for the following year. The Tour’s alumni include 41 PGA TOUR players and 232 Korn Ferry Tour players since 2013. The Mackenzie’s Tour mission is to provide a high-quality platform to produce alumni that move to the next level and eventually the PGA TOUR, while making a positive impact in the communities where tournaments are played.

About The Canada Life Assurance Company
Canada Life is a leading insurance, wealth-management and benefits provider focused on improving the financial, physical and mental well-being of Canadians. For more than 170 years, individuals, families and business owners across Canada have trusted Canada Life to provide sound guidance and deliver on the promises it has made. As of January 1, 2020, Great-West Life, London Life and Canada Life became one company—Canada Life—and today, it proudly serves more than 13 million customer relationships from coast to coast to coast.